The Books of Outremer

Once upon a time, a band of believers set out to win control of the holy places for the faithful. It was a long and dangerous journey, and at the end of it they found people whose ways of life were utterly strange to them, who had skills and built cities they could never have imagined. There were miracles, too, and objects of unearthly power, for those who believed. Yet somehow they managed to carve out a group of little kingdoms of the faithful, and to hold on to them for generation after generation. And they called them Outremer, the Land beyond the Sea. 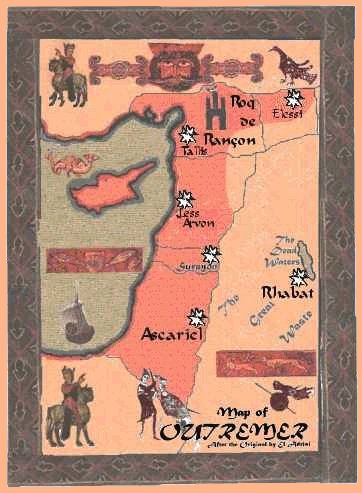 Is this a true story? There are two answers. One is, yes, it is a true story, and you can read about the Crusader Kingdoms in the history books: a good place to start is Sir Steven Runciman's three-volume A History of the Crusades (Vol. I, Vol. II,Vol. III).

The other answer is, yes, of course it's a true story, and Chaz Brenchley invented it. His classic fantasy series The Books of Outremer was first published in the 1990s - and now Chaz'z agent has announced a new edition, to be published by Wizard's Tower Press in six volumes, beginning in early 2022.

The story opens in in the stronghold of Roq de Rançon, in the north of Outremer, where Marron comes as a novice in the military order of Ransomers, where Julianne comes to meet the Elessan baron she must marry, where Jemel comes as a member of an attacking army and where Elisande comes, but won’t say why...

Publisher Cheryl Morgan says: "I read the Outremer series in 2004. At the time, Crusader imagery was regularly utilised in support of the war in Iraq, and depiction of queer relationships in fantasy was still a rarity. Consequently the series was a breath of fresh air in a world just starting to go mad. I'm delighted to be able to bring these books back to the reading public."

This website explores the world of Outremer, the magic in it and the factual history behind it, and the interplay between the two.

More about The Books of Outremer, including how to buy the books:


Elsewhere on the site:


And if you have any comments or suggestions, or if there is anything else you would like to know, why not .

The Books of Outremer (and many of the other books mentioned in this website) can be ordered from Amazon; all you have to do is click on the underlined titles. Or use the search boxes below to buy any other product from Amazon, in the UK or the USA - they will send books anywhere in the world.

Chaz Brenchley is a participant in the Amazon Europe S.a r.l. Associates Programme, an affiliate advertising programme designed to provide a means for sites to earn advertising fees by advertising and linking to Amazon.co.uk/Javari.co.uk/Amazon.de/Amazon.fr/Javari.fr/Amazon.it.