In the Kitchens of the Roq

Each medieval monastery conducted its life according to the rule laid down by the founder of its Order, which determined whether the brothers lived together or in individual cells, when they prayed and what they wore, how they worked and what they ate. The Rule of St Benedict, for example, sets out in Chapter 39 The Measure of Food:


We believe it to be sufficient for the daily meal ... that every table should have two cooked dishes, on account of individual infirmities, so that he who perchance cannot eat of the one, may make his meal of the other ... and if any fruit or young vegetables are available, let a third be added. Let a good pound weight of bread suffice for the day, whether there be one meal only, or both dinner and supper. But if their work chance to be heavier, the abbot shall have the choice and power, should it be expedient, to increase this allowance ... Except the sick who are very weak, let all abstain from the flesh of four-footed animals.

Bread was a major part of the daily diet, so the Rule specifies the quantity to which each brother is entitled. The dough might be prepared from wheat, or from a mixture of grains; the social status of the monks is shown by the reason given by one lay brother for wishing to join the Cistercian order: "white bread and often". (This story, like much of the information about the monastic diet, comes from Eileen White's contribution to Food for the Community: Special Diets for Special Groups, edited by C. Anne Wilson for the Edinburgh University Press). There was no special bakers' yeast, let alone dried yeast: the dough could be leavened using brewers' yeast (barm), or by means of ambient yeasts (often in the form of sourdough, a portion of dough reserved from the previous day's baking). 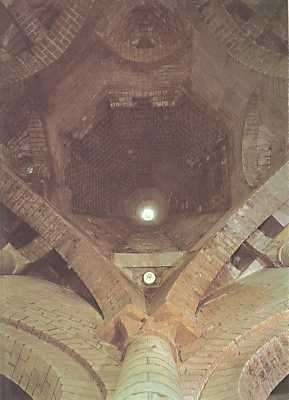 The ovens in which the bread was baked were not the self-heating metal boxes in use today but massive stone or brick structures, shaped like a giant cone or beehive, part of the fabric of the building itself. The Abbey of Fontevraud, on the Loire, has a twelfth century kitchen which is both exceptional in itself and characteristic of ecclesiastical architecture of its region and period. Eight ovens (of which only five survive) were arranged around one side of an octagonal base, rising to a square which in turn supports an octagonal roof.

Marron, showing Rudel around the castle of the Roq, pauses in front of "the massive bread-ovens, surely they were worth a word or two?": not only were they large enough to bake all the bread required each day by the whole community, they functioned by retaining heat, and their huge bulk enabled them to do this. Before baking, a fire was lit inside each oven, using its mass to store up the heat. Then the embers were swept out, the risen dough was placed in the oven, and the heat fed back steadily until the bread was ready. As the heat diminished, heavy wholemeal bread could be followed into the oven by finer white bread, small rolls and finally the little titbits baked in a low oven or petit four.

The Benedictine Rule is by no means vegetarian; it does not exclude the eating of fish or poultry, but permits the consumption of other meat only in exceptional circumstances. The Society of Ransom is a military order, in which both knights and brothers are expected to train strenuously and fight when necessary; its rule seems to place less restrictions on the eating of meat. Certainly, the kitchens are able to provide Marron with mutton broth when this is required - but judging from Marron's reaction, this is, equally certainly, not something they do every day. Here is Chaz Brenchley's recipe for mutton broth:

Seething any form of mutton in water results in the pure thing, echt broth; if no other meat, from a leg to a sheep's head, is to be cooked (rare, surely, in mediaeval kitchens), then this is pretty much how it has been done since the Dark Ages.

Take an iron cauldron and rub it well with the tail of a fat sheep, to prevent burning. Chop up a sheep's neck and put it in the pot, with bacon rind. Add onions, roughly chopped but not skinned; also slices of turnip, and thyme, mint and marjoram. Fill with water, and hang high above the fire. When it begins to stir, skim off the rising fat; then cover, and leave to seethe for some hours.

This yields plain broth. The following day, it can be skimmed again when cold, and barley, slivers of meat and vegetable can be added and the whole boiled up to yield a more substantial soup.

A contemporary version is easy to adapt: no need to grease the pot, and extra bones can be added for extra flavour. Also of course pepper, which improves it mightily.

This has much in common with the recipe for venison stew in The Forme of Cury, a collection of recipes used at the court of Richard II, king of England from 1377 to 1399:

Roo Broth. Take the lire of the deer other of the roo; parboile it on smale peces. Seeth it wel, half in water, and half in wyne. Take brede, and bray it with the self broth, and drawe blode thereto, and lat it seeth togedre with powdor-fort of gynger, other of cannell and macys, with a grete porcionn of vynegar, with raysons of corannte.

or, in modern English:

Venison Stew. Take the flesh of the deer or the roe. Parboil it in small pieces. Cook it well in equal parts of water and wine. Take bread and crush it in the broth. Add blood and let it cook together with strong powder of ginger or of cinnamon and mace. Add a great portion of vinegar and some currants.

This royal broth is simply a richer variation on the theme, with spices replacing the homely herbs which give savour to the mutton broth. Bread and blood are both used as thickening agents, and currants add a sweetness characteristic of medieval savoury recipes. Both the original and modern English texts are taken from To The King's Taste, an adaptation of The Forme of Cury by Lorna J. Sass.

In addition to the deliberately restrained diet of the monks themselves, every monastery had to be prepared to cater for the more sophisticated tastes of aristocratic guests. To prevent disruption to the routine of the kitchens, the abbot might have his own kitchen in which meat and other luxuries could be prepared. Perhaps the food sent to Elisande and Julianne by the preceptor, as the girls prepare for Julianne's wedding, has come from his own kitchen: "Cold meats and candied fruits, pickles and preserves, fresh fruit and fresh white bread..."

Elizabeth David's English Bread and Yeast Cookery, the most comprehensive source of information on all aspects of breadmaking, gives Lady Arundel's recipe for manchet (fine white bread), which was first published in 1653 but was probably much older.

Take a bushel of fine wheat-flower, twenty Eggs, three pound of fresh butter, then take as much salt and barm as to the ordinary manchet, temper it together with new Milk pretty hot, then let it lie the space of half an hour to rise, so you may work it up into bread, and bake it, let not your Oven be too hot.

The illustrations on this page are taken from Food and Cooking in Medieval Britain, published by English Heritage. Although the specific texts quoted on this page are not currently available from Amazon, they do stock a selection of books on medieval cookery. There is also a website entirely devoted to medieval cookery, including links to other sites on the subject, maintained by Aoife Finn.

More about cookery in Outremer Feasting with Shadows or in general Cooking with Chaz.


To Tower of the King's Daughter main menu or to Outremer home page.