Chaz Brenchley has a reputation for writing about good food - and for cooking it, too. So it's only to be expected that a book with the title Feast of the King's Shadow should contain at least one description of a royal banquet. The first such meal appears early in the book, when the travellers are summoned to take rice with the Sultan. Marron, at least, expects a simple dish, a symbolic breaking of bread:


Taking rice with the Sultan of Bar'ath Tazore, it seemed, was something else entirely: a noble custom corrupted, by Jemel's expression, a beautiful vessel broken.

The Sultan's rice was a precious mountain, a heaped and steaming dish of jewelled gold. The rice had been cooked with saffron, and was flecked with bright peppers and spice-pods, preserved peels, coloured shreds of smoked meat and fish, all gleaming with a buttery sheen. Around it was set a circle of smaller dishes containing boiled eggs, salted lemons, vegetables pickled in vinegar or drenched in oil.

All the dishes described in Feast of the King's Shadow are of Chaz's own invention; but for anyone trying to reproduce them, Claudia Roden's A New Book of Middle Eastern Food would be an invaluable help. Here is her recipe for a rich rice dish called Shirini Polo:

To prepare the candied peel: use peel with as much of the white pith removed as possible. Slice it into thin strips and make a note of the weight. Simmer without sugar in about ½ teacup water until soft. Then add sugar equal to the original weight and cook until the water is reduced and the strips of peel are sweet. Bitter peel is particularly good prepared in this manner. (The candied peel available in shops can also be used).

Prepare the rice for chilau: wash well in a colander then put it in a bowl with 2 tablespoons salt and lukewarm water to cover. Stir and let it soak - overnight if you can, or for at least an hour, the longer the better. Then fill a large saucepan with plenty of water, add salt and bring to the boil. Sprinkle the drained rice in gradually and let it boil vigorously for about 4 to 8 minutes. The cooking time varies from one batch of rice to another and depends mainly on when it has been harvested. Test a grain of rice by biting it. When it is just a little underdone - it must be slightly harder than you would like to eat it - drain quickly and rinse in lukewarm water.

Boil the chicken joints in water to cover with salt and pepper to taste and ¼ teaspoon saffron until the chicken is tender and the stock greatly reduced. Bone the chicken and cut the flesh into small pieces. Return the pieces to the pan with the remaining stock, add the peel and almonds or pistachios, and continue to simmer for 15 to 20 minutes, uncovered only if the sauce needs reducing to suit the rice.

Melt 1 to 2 tablespoons butter or oil in the bottom of a large, heavy saucepan. Put alternate layers of rice and chicken with peel and nuts in the pan, starting and ending with a layer of rice.

Now, stretch a clean cloth over the top of the pan, put on the lid and steam over very low heat for 20 to 30 minutes, until the sweet juices of the chicken sauce have penetrated the rice. The cloth will absorb the steam and help the rice to retain its fluffiness. 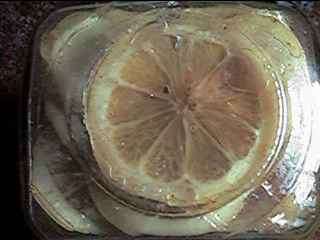 Scrub lemons well and slice them. Sprinkle to slices generously with salt and leave for at least 24 hours on a large plate set at an angle, or in a colander. They will become soft and limp, and lose their bitterness. Arrange the slices in layers in a glass jar, sprinkling a little paprika between each layer. Cover with olive, nut, or a light vegetable oil.

Close the jar tightly. After about three weeks the lemons should be ready to eat - soft, mellow and a beautiful orange colour.

But the feast after which the Second Book of Outremer is named is prepared and served by the women of Rhabat on behalf of Julianne's father, the King's Shadow. This time the feast is described from behind the scenes, as Julianne and Elisande volunteer to help in the kitchens. At first they are set to preparing spices, and, when "they [have] finally worked all that garlic and ginger and turmeric into a soft and pungent mound", Sherett brings Julianne apricots to stone. Later, Elisande is given nuts to grind in a mortar, and mixes the resultant paste "with honey and whole nuts and saffron steeped in rose-water, to make sweets for the men to amuse their tongues and their bellies with after they had feasted, while they talked and drank coffee.." Here is Claudia Roden's recipe for a similar sweetmeat:

Make a slit in each apricot and remove the stone, taking care not to break the fruit in half. Put the apricots in a large pan with the lemon juice and sugar. Warm the pan slowly, covered, and let the apricots simmer gently in their own juice, turning them and stirring from time to time, and moistening with a few tablespoons water if necessary. Cook until the apricots are soft and have released their juices to form a syrup with the sugar. Allow to cool.

Make a paste with the ground almonds, sugar and rose water, and knead well. Fill the apricots with this paste and serve them cold in individual bowls, with the syrup poured over them. The apricots can also be served warm, in which case they should be returned to the pan and heated gently with the syrup.

Or perhaps Elisande's nut paste was used as a filling for the little pastries known as ma'amoul:

For the nut filling:

Sift the flour into a large mixing bowl. Work butter into the flour and mix thoroughly by hand. Add orange blossom or rose water, followed by milk or water - just enough for the dough to hold together - and work until it is soft, malleable and easy to shape.

Take a walnut-sized lump of dough. Roll it into a ball and hollow it out with your thumb. Pinch the sides up to make a pot shape. Fill, then press and pinch the dough back over the filling, making a little ball shape. Place the pastries on a large oven tray. Decorate the tops of the pastries with tweezers, or make little dents with a fork. (This will help the icing sugar to cling when they are baked.) Bake in a pre-heated slow oven (160°C / 325°F / Mark 3) for 20 - 25 minutes. Do not let the pastries become brown. They will become hard and their taste will be spoiled. While they are still warm, they will appear soft and uncooked, but on cooling they will become firm.

When cold, roll them in icing sugar. They will keep for a long time in a tightly closed tin.

The incomparable Claudia Roden has also written a book entirely dedicated to the coffee which accompanies these delicacies. She describes how coffee was first cultivated in Arabia and how it spread throughout the Islamic world:

Coffee berries were eaten whole at first, or crushed and mixed with fat. Later, a kind of wine was made with the fermented pulp. In about A.D. 1000 a decoction was made of the dried fruit, beans, hull and all. The practice of roasting the beans was started around the thirteenth century.

In other words, while coffee was known at the time of the historic Crusades, and might even have travelled to a city positioned, like Rhabat, at a junction of trade routes, it would not have been prepared as the hot after-dinner drink known throughout the modern world. But in the fantasy world of Outremer, coffee is provided for the gratification of those of us for whom no feast, however magical, is complete without it!

Not all the meals described in Feast of the King's Shadow are as lavish as these; hunger is weak in the land of the djinni, and those who travel there are satisfied by the most frugal food. Elisande bakes flatbread by mixing flour and water, and cooking the resultant paste on a flat stone which glows with its own heat:

When she smelled smoke, she flicked the dough-cake over with the point of the knife; when again her nose told her that it was starting to burn, she lifted it off and tore it gingerly in two ... the crust of the loaf tasted like cinders in her mouth and the inside was still wet and somehow rancid. 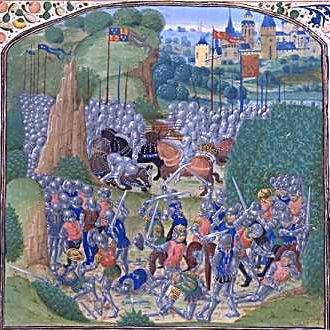 The following night she does the same, and produces something more palatable. The technique is the same as that described by the fourteenth century historian Jean Froissart. F. Marian McNeill quotes him in The Scots Kitchen:


According to Froissart, the accoutrements of the Scottish soldier in the fourteenth century included a flat plate at his saddle and a wallet of meal at his back, 'the purpose whereof is this: Whereas a Scottish soldier hath eaten of flesh so long that he beginneth to loathe the same, he casteth this plate into the fire, he moisteneth a little of his meal in water, and when the plate is heated, he layeth his paste thereon and maketh a little cake, the which he eateth to comfort his stomach. Hence it is no marvel that the Scots should be able to make longer marches than other men.'

Elisande does not need to make her own fire, since heat inheres in the ground beneath her feet: not carrying a griddle with her, she cooks on a flat stone; and she bakes with flour where the Scots presumably used oatmeal. But the basic process is the same, and has the same fortifying result.

More about cookery in Outremer In the Kitchens of the Roq or in general Cooking with Chaz.