The City in the Rock 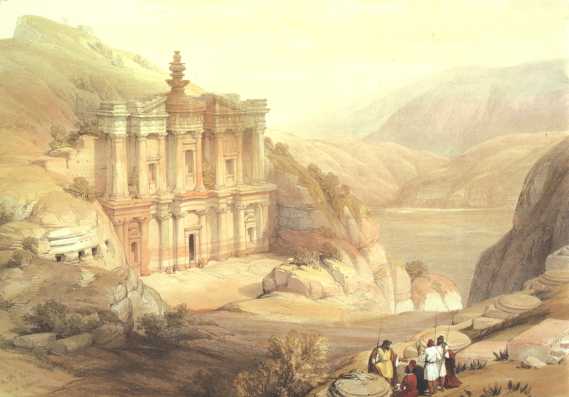 "There's only one way to see Rhabat for the first time..." complains Elisande, as the party of travellers approach the cliff-top from which they will descend through the hidden tunnel to the city. Rhabat is the centre of Feast of the King's Shadow: Rhabat as the goal of a hazardous journey, Rhabat as the location of the council of the tribes which could decide the future of Outremer - but also Rhabat itself, on the Dead Waters, a city like no other in the world. And yet there does exist a city which bears comparison to Rhabat, and if Elisande is critical of the breathtaking view before her, it is because she would have preferred to bring her friends along the route described by G. Lankester Harding in his book on The Antiquities of Jordan:

The road goes straight down the torrent bed, and, as one penetrates farther in, the sheer rock face on either side gets higher and higher, and there is no sound save the clatter of the horses hoofs on the pebbles and the wind sighing through an occasional oleander bush. Sometimes the rock almost meets overhead, and all is dark and cool; at others it opens out and the scene is flooded in sunshine. On either side can be seen rock-cut channels for bringing the water from Ain Musa into the city; occasionally where the rock has fallen away the channel is made up with blocks of stone. The road goes on and on, seemingly endless, but actually for about 2 kilometres, the only relief from the enclosing walls being an occasional side valley giving, perhaps, a glimpse of a broken rock-cut stairway leading to some now-forgotten house or place of worship. Originally the whole way had been paved with large blocks of hard limestone, and in some places where the torrent has cut down through the fall of stones and soil these paving-blocks can be seen in section. There are small niches carved irregularly in the sides, usually containing the representation of the god Dushara, a rectangular block of stone or an obelisk; these are sometimes single and sometimes in groups. 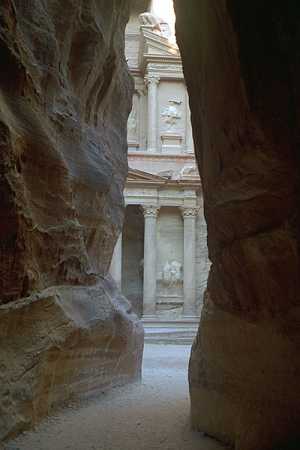 Just when it begins to seem there can be no way out of this narrow, winding canyon, one is pulled up short by a glimpse straight ahead of part of a magnificent façade adorned with columns and statues. The best time to arrive here is between ten and eleven in the morning, for then one emerges from the gloom of the Syk into brilliant sunshine which lights up the façade of one of the most impressive of all Petra's monuments, El Khaznah. This is a sight which will never be forgotten, for the rock here is really "rose red" and in the sunlight it glows as though itself was giving off radiance; the effect is enhanced by the dark green of the oleander bushes in the foreground.

In our world, Petra does not lie on the Dead Sea, but some hundred kilometres south, in the desert of what is now Jordan. But in all other respects, it is very similar to the city of Rhabat. Here, for example, is Marron's first sight of the city; he is awestruck, and no wonder: 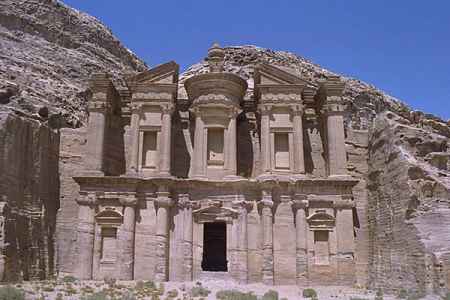 From base to high crest, this entire wall of rock had been carved and hollowed into the semblance of a city. It might almost have been the work of a god, the original that man's buildings merely mocked. Unless this had been meant itself to mock those who built with common stuff, stone and brick and wood. There were separate faces here, divided by deep recesses, as though it were a street of separate houses; each had its arches, windows, pediments and pillars, all manner of decoration and ornament.

Petra, too, is a city carved into the red sandstone of the cliffs, and the name by which it is known in the West reflects this: petra is the Latin word for "rock". But the site was inhabited long before the Romans arrived; archaeologists have discovered both Stone Age and Iron Age dwellings in these rocky valleys. 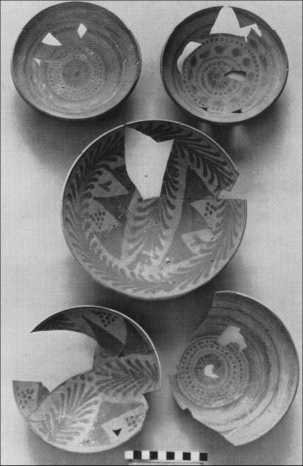 The history of the city itself begins around the fourth century BCE with the arrival of the Nabataeans, a semi-nomadic people originating in the northern Arabian Peninsula. They were builders, cutters of stone, potters. They also had their own language (a precursor of modern Arabic) which they wrote down in their own script, one not entirely unlike the contemporary Hebrew script, but in a more vertically stretched form. They already knew how to profit from the wealth of the caravans trading with the East before they came to Petra, probably first by attacking and plundering them, later by exacting tolls in exchange for safe passage; and they built Petra on the route used by those traders, the Road of Silk to Samarkand and beyond.

Rome was bound to take an interest in such wealth situated just beyond the boundaries of its empire, but for a time the Nabataeans were able to maintain a degree of independence, thanks both to their impregnable position and to the wealth which allowed them to buy off would-be conquerors. Pompey visited Petra in 65 BCE; Mark Antony included it in his gift to Cleopatra of a large part of the province of Arabia, and in 72 CE Lindsey Davis's fictional Roman detective Marcus Didius Falco was sent there to spy out the terrain in Last Act in Palmyra. Falco was impressed by the city:

We had already passed enough rock-hewn tombs, free-standing blocks with strange, stepped roofs, inscriptions and carved reliefs to strike a sense of awe. Then had come the forbidding gorge, along which I noticed sophisticated systems of water pipes...

but unfortunately he discovered a corpse and was asked to leave before he could investigate further. In 106 CE, Rabel II, the last king of Petra, died, and the emperor Trajan annexed the region as a Roman province. It was the practice of the Romans to build their cities to a consistent pattern, and Petra now has its Roman main street, complete with columns. 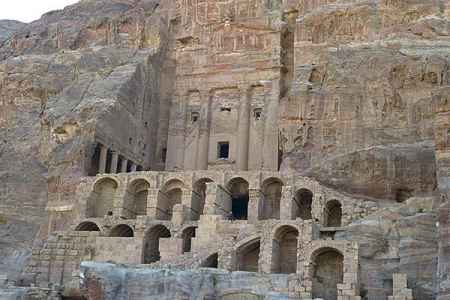 For a period Petra continued to flourish under Roman rule; at least one of the Roman governors minted coins there. But gradually the merchant caravans on which Petra's affluence was founded began to take other routes, and as Palmyra grew in importance, Petra began to decline; Harding comments (in 1969) that "not a single gold Nabataean coin has ever been found and silver ones are extremely rare." By the fifth century, there were was a Christian Bishopric of Petra, and the interior of the Urn Tomb had been converted into a church.

There followed, as Elisande explains to Julianne, a period of quiet obscurity:


No one knows truly who made [Rhabat]. The Sharai discovered it, centuries ago; but it wasn't empty at the time, there were people living here, occupying a little of its immensity. They might have been descendants of the original builders; some of the stories claim as much. The Sharai drove them out, and took possession.

In Petra, too, by the early twelfth century, there was a Turkish encampment in Wadi Musa, near Petra, and Bedouins living in the caverns nearby, but the area came under the uncertain control of the Crusader kingdoms; Baldwin I attempted to strengthen his grip by building two castles on the hills above Petra.

During the centuries after the Crusaders were expelled from Outremer, Western scholars and romantics acquired the habit of referring to the "lost city" of Petra; by which they meant that they were unable to identify the site of the famous capital of ancient Arabia Petraia; the remains of Petra were still known to the Bedouin, they simply did not encourage strangers to visit. Nonetheless, the story of Petra's "rediscovery" by J. L. Burkhardt in 1812 is a colourful one: aware that previous Western explorers had failed to return from the area, he learned Arabic and travelled in disguise. His interest was sparked by reports of fantastic ruins hidden in the mountains at Wadi Musa (which means "the spring of Moses", this being one of the sites connected with the Bible story of how Moses brought a spring rushing from the rock by striking it with his stick). So he persuaded his guides to turn aside from his supposed route:


I, therefore, pretended to have made a vow to have slaughtered a goat in honour of Haroun (Aaron), whose tomb I knew was situated at the extremity of the valley, and by this stratagem I thought that I should have the means of seeing the valley on my way to the tomb.

Since the guide did not dare provoke Aaron's anger by depriving him of the promised sacrifice, this plan was successful, and Burckhardt was able to travel through the Siq and see a number of the major sites, even talking his way into the Khaznah, of which he was able to sketch a plan. 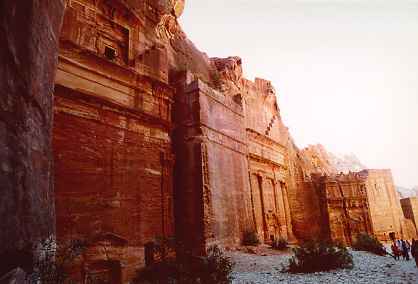 Since that first visit, Petra has been recognised by UNESCO as a World Heritage Site, and has become the Kingdom of Jordan's major tourist attraction. A number of websites reflect this. The photographs on this page were taken by Angus McIntyre and Grisel Gonzalez, whose own websites offer particularly vivid descriptions of their visits to Petra.

This page has been extensively revised with the help of The Antiquities of Jordan by G. Lankester Harding (published by the Lutterworth Press, London, in 1967). Harding, the archaeologist who was in charge of the antiquities of Jordan from 1936 to 1956, is lively company as well as being an authoritative guide to the area. He describes not only the ruins but also the flora, including the characteristic "black iris", and the fauna, the "rose finch, the brightly coloured rock-thrush, and Tristram's grackle" which surround them. He comments, about Petra, that "In this part also can be seen sky-blue lizards, and others with red or blue heads; their presence has nothing to do with sobriety or otherwise."