The Russian edition of Tower of the King's Daughter was published, towards the end of 2001, by AST in their Vek Drakona (Age of the Dragon) series, translated by I. V. Yushenko. The cover is by Anatoliy Dubovik. As Chaz points out, it was clearly designed by someone who had read the book; the back cover blurb is somewhat more enigmatic: 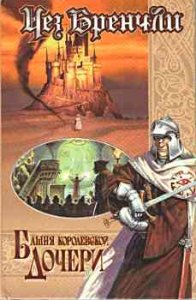 This is Outremer, the Foreign Land.
A world where men kill and men die for heresy.
A world where the king is only "the first among equals".
A world which was once upon a time divided into five parts, but which now dwells in only four of those parts. But the fifth part of the world - the magical land - has been deliberately locked away inside itself, at the height of its magical powers...

This is the Foreign Land.
A world, in which the young princess Julianne must live out a great and terrible destiny.
For so it is that only a king's daughter, who bears the lofty title "Daughter of the King's Shadow", can penetrate into the inaccessible Tower of the King's Daughter, and bring with her a warrior, who, according to the ancient prophecies, will take possession of the mysterious, all-powerful weapon there...

This is the Foreign Land.
A world, whose destiny these two alone will change.

A Russian site entitled (in Russian) New fantasy / SF books at Nizhni-Novgorod book market offers an introduction (in Russian) to the series, drawing much of its information from the blurb and from this website.

Back to Covers Gallery or to Outremer home page.

Thanks to Vladimir Kryshtalov and to Vythe for help with Russian translation!