Among the most enigmatic characters encountered by Marron and his friends, and those who most affect the course of events, are the Sand Dancers. Elisande tells Julianne what she knows about them:


"They are men sworn to a brotherhood, ... sworn to serve the Ghost Walker, if he should come. They give a finger to their God, in witness; and they live apart from the tribes, in little groups together. For centuries now, they have lived with each other and their vows, and nothing more. Now the Ghost Walker has come again, he stands among them, and they are trying to slay him..."

Like the Ransomers, their brotherhood has the form of a religious order; yet the service for which they are trained is military. They have sworn to serve the Ghost Walker, and intend to do so as warriors, helping him to drive the invader from the land.

A comparable force existed among the Islamic peoples of the historical Outremer; during the later decades of the eleventh century, a group of followers of the Ismaili sect of Islam developed into a major political force by perfecting the art named after them: assassination. 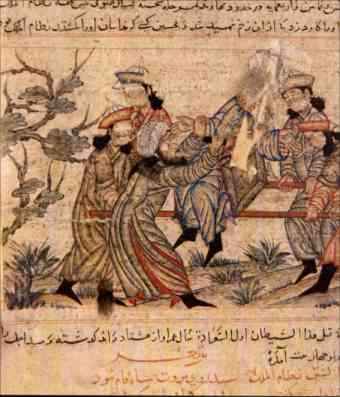 The founder of the Assassins, as they were later known, was a Persian called Hasan as-Sabah, a convert to the Ismaili sect of Shi'ite Islam, which accorded particular devotion to Mohammed's son-in-law and successor, the imam Ali. Hasan was regarded by his followers as a scholar and a theologian, but, as Steven Runciman remarks in his History of the Crusades:


Wherein exactly his teaching improved on the mystical and allegorical theology of the Ismaili is obscure. His outstanding achievement was more practical. It was to build up an Order, united in strict obedience to himself as Grand Master, which he used for political purposes.

In 1090 he took possession of a stronghold in Khorassan which formed a suitable headquarters for that Order. Amin Maalouf describes it in his novel Samarkand (my translation from the French original):


Alamut. A fortress on a rock, six thousand feet up, in a landscape of bare peaks, forgotten lakes, steep cliffs and constricted passes. Even the most numerous army could only reach it one man at a time. The most powerful catapults could not touch its walls. 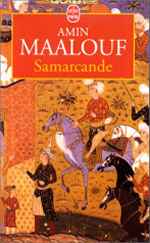 Between the mountains the Shah-Roud, nicknamed the "mad river", holds sway. In the spring, when the snows melt on the Elbourz, its flow swells up and races along, ripping up trees and boulders as it passes. Misfortune to anyone who comes too near, misfortune to any troops who dare to camp on its banks!

From the river and the lakes a thick, fleecy mist rises each evening, climbing up the cliff but stopping midway. For anyone who is there to see it, the castle of Alamut then becomes an island in an ocean of cloud. Seen from below, it looks like the haunt of the djinni.

In the local dialect, Alamut means "the eagle's lesson". Legend tells how a prince, wanting to build a fortress to dominate the mountains, released a trained eagle. The bird of prey spiralled through the sky, and finally came to rest on this rock. Its master realised that he would not find a better site.

Samarkand, a fictionalised "biography" of the original manuscript of the Rubaiyat of Omar Khayyam, also tells how the three influential contemporaries, Hasan as-Sabah, the poet Omar Khayyam and the vizier Nizam al-Mulk were originally allies. But Nizam and Hasan differed in their religious and political views, and in 1092 Nizam al-Mulk became the first victim of the Assassins.

The origin of the organisation's name is unclear. Maalouf follows a number of Ismaili sources in affirming that "assassin" is derived from the Arabic assass (foundation), via assassiyun (fundamentalists); they were simply believers in a purer and more basic form of Islam. A more highly-coloured derivation, favoured by Western writers, points to the Arabic hashashshin (eaters of hashish) to explain both the name of the Assassins and their fanatical devotion to their leader, the Old Man of the Mountain: their sanguinary tactics were fueled by narcotics.

That inspired teller of travellers' tales, Marco Polo, fuses together these two explanations to form one: he ventured into a region which he calls Mulehet, south of the Caspian sea, in which the Assassin stronghold of Alamut stands. On his return home, he claimed:


Mulehet, the name given to heretical Saracens, is also the name of the famous place where the Old Man of the Mountain used to live. This is the story of the Old Man just as it was told to Marco Polo by many people.

According to legend, the Old Man was called Alaodin. He had made, in a valley between two mountains, the biggest and most beautiful garden imaginable. Every kind of wonderful fruit grew there. There were glorious houses and palaces decorated with gold and paintings of the most magnificent things in the world. Fresh water, wine, milk and honey flowed in streams. The loveliest girls versed in the arts of caressing and flattering men played every musical instrument, danced and sang better than any other women. The Old Man had persuaded his men that this was Paradise. The Prophet Mohammed had taught that those who went to Paradise would find as many beautiful women as they wanted, rivers of wine, milk, honey and fresh water. So the Old Man of the Mountain had his garden built like Mohammed's Paradise and the Saracens really believed it was Paradise.

Marco Polo goes on to explain how this belief was maintained. Young men who were being trained for a mission of assassination were given a sleeping draught and then taken into the garden while unconscious. When they awoke, their ravishing surroundings naturally persuaded them that they were in Paradise itself. They remained in this happy state until a victim was designated, when they would once more be drugged, and were removed, still asleep, from the garden. The certainty, born of experience, that Paradise existed and would be their reward, not only strengthened their determination to succeed in their task, it also removed all fear of failure - knowing what awaited them in the next world, they did not fear death. In other words, the Old Man won the devotion of his agents both by administering drugs and by exploiting their simple piety.

Despite his taste for colourful detail, Marco Polo was also a realist. He ends his description of the Assassins with the comment that:


Many kings and barons paid tribute to the Old Man and cultivated his friendship for fear of being murdered. The Old Man was aided in this by the fact that the kings were always quarrelling amongst themselves and were not united under one power.

Like the Sand Dancers, the Assassins were a rogue force in the fragmented policies of Outremer; unlike the Sand Dancers, who saw the Ghost Walker as a weapon to drive the invaders from the land, the Assassins were as hostile to the Sunni Moslems as they were to the Christians. They formed a faction to be reckoned with, with their own policies, alliances and castles, initially in Persia but soon spreading into Egypt, Iraq and Syria. 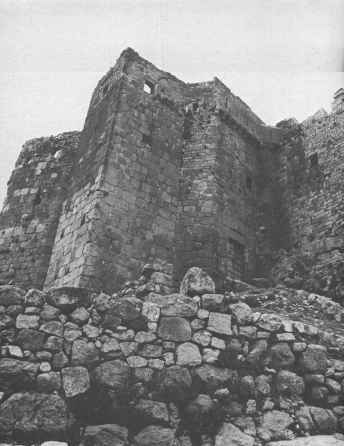 In this, their position among the Moslems mirrored that of the military orders, and in particular the Templars, among the Christians. Both parties had their own organisational priorities which sometimes cut across their nominal allegiances. Under Rashid ed-Din Sinan of Basra, that leader of the Syrian Assassins who was known to the Christians as the Old Man of the Mountains, the Assassins were even able to establish a little state of their own. In 1169 Sinan sent messengers to Amalric I, king of the Latin kingdom of Jerusalem, suggesting an alliance against their common enemy Nur ed-Din, and even hinting that the Assassins would consider converting to Christianity. In return, they asked to be released from the tribute imposed on a number of Assassin villages by the Templars. Amalric thought these overtures worth encouraging, but before the envoys could return to their master, they were murdered by a Templar knight, Walter of Mesnil (apparently acting with official approval). Furious, Amalric threw Walter into prison, and the attempt to sabotage the alliance (and so safeguard Templar revenues) was thwarted. Amalric's death from dysentery (or from the medical treatment he received for his ailment) proved a further setback to negotiations, and in 1192 Conrad of Montferrat, was assassinated on the eve of his coronation as King of Jerusalem. The thirteenth century Itinerarium regis Ricardi gives this account:


When they were about to rejoin the army at Ascalon, Conrad, marquis of Montferrat, was detained at Tyre by his unexpected death.

He was peacefully making his way home, very happy and joking, from a dinner engagement with the bishop of Beauvais. He had just reached the city toll-booth when two youths, Assassins, made a sudden attack on him. They were unencumbered by cloaks and thrust at the marquis with the daggers they held in their hands. They penetrated his chest with these, lethally wounding him, and were ready to make a swift getaway.

The marquis immediately fell from his horse and was rolling on the ground, fatally wounded. One of the murderers was immediately cut down while the other ran straight into the nearest church. In spite of this he was snatched from it and dragged as a condemned man through the middle of the town until his last treacherous breath.

Before he died, the killer revealed that he and his accomplice had been sent by the Old Man of the Mountain, who had personally decreed Conrad's death: the chronicler proceeds to explain how the Old Man was accustomed to train his agents and how, when he had chosen the victim they were to kill, "for performing this task he presents each with his own dagger, which is very sharp and has a horrifyingly long blade."

Other victims of the Assassins included the vizier al-Afdal, the Caliph al-Adil, Raymond II of Tripoli and Albert, the Patriarch of Jerusalem; representing Christians and Moslems, laymen and clerics alike.

By the thirteenth century, the policies of the Persian Assassins had become more moderate, but they were unable to withstand the advance of the Mongols. In the words of Marco Polo:


In about 1262, Hulagu, the Lord of the Levantine Tartars, having heard of the Old Man's horrible ways, decided to destroy him. Hulagu chose a few of his barons and sent them with a large army to attack the Old Man's fortified castle. It seemed impossible to capture and would certainly never have been taken if the people inside had been able to get food. The siege lasted three years, by the end of which time there was nothing left to eat. The Old Man of the Mountain, Alaodin, was captured and put to death with all his men, and the castle and the garden of paradise were demolished. So that ended the evil rule of the Old Man of the Mountains and his assassins.

In sober fact, Alamut did not fall to the moral outrage of public opinion, but to the expansion of a new power in the world: the Mongols, under the leadership of Hulagu Khan (grandson of Genghis, and brother of the Great Khan, Kubilai). After destroying the stronghold of the Assassins, and with it the main force of the organisation, he proceeded to capture and destroy the headquarters of orthodox Islam in Baghdad.


A detailed and interesting account of the Assassins, based on Arkon Daraul's A History of Secret Societies appears on the web in two sections, The Old Man of the Mountains and The Later Days of the Assassins. Desmond Seward's The Monks of War includes the tantalising information that "Their [the Assassins'] weapon was the poisoned knife, flat cakes their trade mark, and they terrorised Moslems and Christians alike." (I am grateful to Nigel Robertson for this reference).