Relics of the Saints

In Feast of the King's Shadow, Marron and his companions took shelter in an abandoned house; they learned that its inhabitants had become ill with a mysterious wasting disease which was striking down many of the people of the oasis. There was only one way to be cured of this dreadful illness: a holy man, "a wild priest with the mummified hand of a saint in his possession", had the power to revive anyone he touched with his "saint's hand". Later, in Hand of the King's Evil, the preacher and his severed limb, with its strange - and rather sinister - curative powers, move to the foreground of the story:

The Outremer in which these events take place is a fantasy land, and the Patric religion of the Kingdom of Outremer is not Christianity: but the belief that the physical remains of the holy dead had curative - and other - powers, is also present in Christianity from its earliest days. 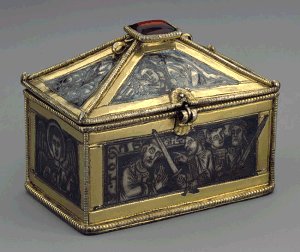 The Catholic Encyclopaedia points out that there are similar practices in other religions, and gives examples of classical, and even Buddhist, veneration of the physical remains of heroes and holy men. It is a widespread result of human emotion, as St. Thomas Aquinas pointed out in the thirteenth century, to treat the dead with respect: he argued that anyone who has been fond of someone during their lifetime will continue, after their death, to venerate what they leave behind, not only their bodily remains but also such external items as clothing and the like [qui habet affectum ad aliquem, etiam ea quae de ipso post mortem reliquuntur, veneratur, non solum corpus aut partes corporis ejus, sed etiam aliqua exteriora, puta vestes et similia]. God shows his approval of this practice by performing miracles in the presence of those relics, as a mark of respect.

Aquinas was intelligent, rational and devout; his analysis manages to reconcile contemporary practice with his church's rejection of idolatry. But what lies between an orthodox Christian trust in the power of God as displayed in the presence of relics, and an idolatrous worship of the wonder-working relics themselves is not a simple alternative, it is a continuous spectrum. For example, if proper respect is to be shown to the remains and reminders of the holy dead, those remains must be stored in a suitable container. Such containers, called reliquaries, were constructed of precious materials, gold and silver, ivory and gemstones. They were richly decorated, often in a way which gave a literal reminder of the claim to sanctity of the person whose relics they contained. This might result in a casket, like the one in the collection of New York's Metropolitan Museum, decorated with scenes of the martyrdom of St. Thomas à Becket. When the reliquary depicts by its form the precious fragment within in (a cruciform reliquary containing a splinter of the cross, for example), the distinction is less clear: the holy content and the costly container merge to constitute something of value not only as a memento of someone else, but in its own right. Taking this to its extreme, the container as a whole might be a representation of the saint, like the gem-incrusted, golden image of Saint Faith in the treasury of the Abbey at Conques. Whatever the inner beliefs of the pilgrims who paid their respects to the saint, there is nothing about this extraordinary object itself to distinguish it from a pagan idol.

Conques attracted visitors in part because it lies on one of the great pilgrim highways of medieval Europe, through France and on to Santiago de Compostella in Spain, where the apostle Saint James was reputed (on less than flimsy evidence) to be buried. But any saint who acquired a reputation for miraculous cures became the object of pilgrimage, and a church in possession of particularly efficacious relics could grow rich on the numbers of visitors in search of a cure (or the help of the saint in some other matter), or disinterestedly expressing their devotion. Pilgrims gave jewels to add to the reliquary of the saint who had helped them, they bought mass-produced lead emblems to show which shrines they had visited (a scallop shell for Compostella, a palm-branch for Rome), they left bequests in their wills: this goes some way to explain the rich decoration of some reliquaries. It explains, too, the mobility of the remains of the saints: Bede was originally buried in Jarrow, but his bones were removed to Durham in 1022 by an enterprising monk called Alfred, while the people of Tours were so anxious that the late bishop Martin should be buried in their city that they spirited his body away, according to legend, through a window. 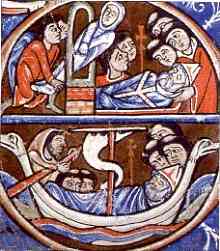 Saint Martin was one of the most popular saints of the middle ages. Pean Gatineau's thirteenth century Life of the saint divides its length almost equally between the events of his lifetime and the miracles he performed after his death: and despite Aquinas's careful formulation that God performs miracles as a courtesy to his saints, Gatineau attributes the cures he describes to the saints themselves, embodied within their relics. In one anecdote, the monks of Saint Martin are carrying the body of their saint on a sort of progress, and while the relics are in the church of Saint Germanus a dispute arises between the local priests and the visitors about the division of the offerings which have been made there. This is resolved by a simple experiment:

A leper, placed equidistant between the two dead saints is cured only on the side which is closer to Saint Martin; Saint Germanus forbears, for the time being, to cure the unfortunate pilgrim, out of courtesy to "son oste", his guest. The relics are simultaneously seen as inanimate objects which can be carried around, and as the actual presence of the two holy men, who can give or withhold miraculous cures at will. 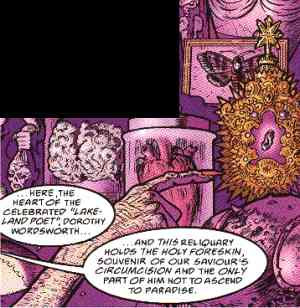 One - or rather, several - of the oddest relics of the Middle Ages was the Holy Foreskin. In the natural order of things, the most holy relics of all would be those of Christ himself. But unfortunately, as Bamber Gascoigne explains sympathetically in his book, The Christians, these were particularly rare:


As he had ascended into heaven, you could not have his skull or his bones as with an ordinary Saint; you had to make do with parts of his body which he had shed before his death. This meant his milk teeth, various tears that he had wept, drops of blood. Most awe-inspiring of all, it meant the relic of the circumcision, and that was what the Chartres reliquary was designed to hold - what the French call Le Saint Prepuce, or in English the Holy Foreskin. At the height of the Middle Ages there were no less than fifteen foreskins of Jesus being worshipped in various churches around Europe.

Bryan Talbot is less indulgent. He places a reliquary containing an example of this holiest of relics in the gruesome collection of the terrifying Queen Anne in his Heart of Empire, and elaborates, on the indispensable CD-Rom which contains not only the graphic novel in full, but also an exhaustive commentary:

He goes on to list some more of the numerous and bizarre relics on view in medieval Europe, before concluding:


Were people congenitally thick in the Middle Ages or what?

Certainly there was an extreme of credulity abroad in the Middle Ages, but it seems to have coexisted with a generous allowance of scepticism. Gautier de Coinci, writing, in the early thirteenth century, a collection of some seventy-odd miracles supposedly performed by the Virgin Mary, defends the authenticity of genuine relics against the wilder claims of popular preachers:

The parody here is very broad: one preacher claims to have a tooth belonging to "Saint Cross", the other to carry one of the days on which Christ fasted, sealed in a crystal flask. Chaucer's Pardoner, described in the Prologue to the Canterbury Tales, keeps things within the realm of possibility:


For in his male he hadde a pilwe-beer,
Which that he seyde was oure lady veyl:
He seyde he hadde a gobet of the seyl
That seint peter hadde, whan that he wente
Upon the see, til jhesu crist hym hente.
He hadde a croys of latoun ful of stones,
And in a glas he hadde pigges bones.

with his pillowcase which he said was the veil of the Virgin Mary, his scrap of the sail that Saint Peter used in his days as a fisherman, his cheap metal cross and his jar of pigs' bones. The holy man of the Books of Outremer has more in common with these hedge-preachers, with their disreputable and bedraggled relics than with the great churches and their bejewelled caskets. The mummified hand, with which he performs his miraculous cures, is not enclosed in gold or gemstones; it is carried around quite informally, and when Blaise sees it, "black and twisted, glinting strangely", it looks to him like the claw of some mythical bird. Were it not for the force of his preaching and the fact that he does seem able to raise the mortally ill from their sick-beds, the preacher and his relic would seem to be frauds like so many others: as it is, their mysterious powers are less easy to dismiss.